And art had always allowed one to follow the visible tracesof thought processes, it now seems clear it can do more even than that. It is the traces of the whole interior life of the spirit which it can give form to. Previously man thought merely in a clear and rational way and art was often reduced nearly to illustrating it. Now after the long journey along the road of individualism, man is fascinated by what till than had escaped him, everithing beyond the relatively exclusive boundaries which respect for reason alone had enclosed him in. 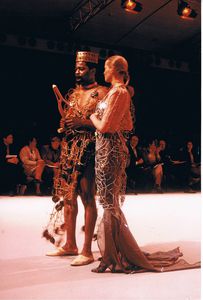 This loose vague world in which interior life finds all of its opportunities even at an early unconscious level is his and that of our time as well.

And in the new traces it follows driven to find unknown riches art becomes his official companion the only one able to adapt to all circumstances and unexpected expressions which doubtless accounts for the increasingly important role it plays in today's intellectual life.

Art use to be attempted to be explained trrought society whereas it is art itself which really explains how that society feels and develops and functions. Art used to be considered an ornament, an accessory to social life which is true but it would be more useful by far to analyse its real purpose and function in our society. Art is the best way of allowing the unconscious to speak.